Synopsis:
Sometimes A + B = O. Yes. Oh, yes. Just like that.
Gabriella Evans’s life exists in terms of logic and definitions. She’s holed up in Portland, Maine, for the summer to work on her PhD thesis, but something is screwing up her concentration: the rumble of a motorcycle every time the embodiment of her rough-and-tumble fantasies rides down her street.
When her best friend talks her into a blind date, she finds herself out with the opposite of her fantasy. He’s polite and well-mannered, yet something behind his crisply tailored shirt doesn’t add up—a rebellious gleam in his eye that piques her curiosity.
Orphaned at fifteen, Connor Starks has finally put the years of failing grades, breaking laws and breaking hearts behind him. The only holdover? His penchant for getting down and dirty in public places. But Gabriella makes him want to prove he’s become a better man.

Nothing intrigues Gabriella more than a problem she can’t solve. But the more Connor tries to bury his past, the more determined she is to uncover it. And what she finds makes all her trusty logic begin to fail her… 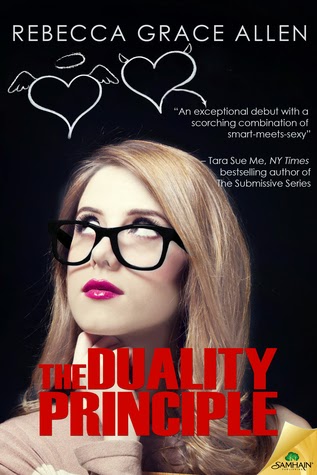 In The Duality Principle by Rebecca Grace Allen, Gabriella Evans 'Gabby' is a mathematician on holiday in Maine, spending her last summer at her grandmother's house before her parents sell it. There, she is enthralled by a mysterious biker, whose face she never sees but cannot stop thinking of or fantasizing about. "Her rider always rode fast and he was always alone."
There also, her friend Jamie sets her up on a blind date. Despite a statistical thirty percent chance of success, Gabby agrees to go to keep her friend quiet. Her date is Connor Starks. Following a bit of a strange blind date, Gabby and Connor decide to meet again.

The plot is simple, Gabby seeks to prove, in her thesis, that duality does not exist; nothing can be two things at the same time; nothing can be black and white at the same time. She believes that duality is not in her nature, whereas duality is in all of us, especially Gabby. In an attempt to disprove duality, Gabby tries to disprove her own dual nature.
Since the first chapter in the novel, we see that Gabriella, who despite being a straight A student, has whims to break free from her life and the mould an intelligent mathematician is placed within. "She didn't want sweet, intelligent and safe. She wanted more."

The characters of Gabby and Connor are different and alike at the same time. Gabby is smart, logical and successful but she has a wild side that past boyfriends have shied away from, viewing her as a freak. Connor, on the other hand, was a rebellious bad boy, who had broken both hearts and the law. But trying to become a gentleman now is a task made harder by Gabby, who prefers the bad boy over the classy guy. Meanwhile, Connor has two struggling sides, which often appear at the same time or minutes apart; one minute he is very flirtatious, the next he is serious and apologetic.
However, it is Jamie's character that appears in a different light at the end of the novel. It is Jamie that makes this novel come to life to begin with.

Despite the raw emotions in the novel, one sometimes feels that Gabby is more into sex than anything else. One realises she has been deprived but this rampant desire lessens the value of both her character and her womanhood for the reader. It is this desire that also worries Connor.

I particularly liked the use of mathematical imagery in the novel; it was highly fitting for Gabby's character: "The truth was that she couldn't figure Connor out, and nothing irritated her more than a problem she couldn’t solve."
Also, "Connor was a complicated proof she needed to take her time with."

The theory of disproving duality is a bit hard to understand and whenever it came up in the novel, sometimes I felt like I got it and at other times I felt completely lost like I was reading Chinese – not one of my languages.
This is probably the only negative comment I have about the entire book. I did not like rereading parts and still feeling like I wasn't making any heads or tails of them; a bit like Gabriella in this respect.

On the other hand, I liked how instead of throwing day-to-day complications for the characters, the author kept bringing up the past and previous experiences in her scenes. The past plays a strong role in both characters' lives and affects their behaviour in the present. The past is the main obstacle in the novel.

Overall, The Duality Principle is an enjoyable and quick read with beautiful narration and imagery throughout.


"A rose represents promises and hope, but its beauty is bonded with thorns. It embodies pain and loss. Combined together, they are in perfect harmony, equal parts beautiful and strong."

Note: This book contains adult scenes and is not fitting for people under 18.

Note: I received a free copy of this book via Xpresso Book Tours for an honest review and to take part in the blog tour for the book.

Also courtesy of the author, there's a Giveaway:


To check out what others think of the book and see some guest posts, here is the whole schedule for The Duality Principle blog tour:
http://xpressobooktours.com/2014/09/16/tour-sign-up-the-duality-principle-by-rebecca-grace-allen/ 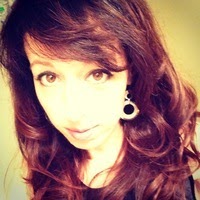 Rebecca Grace holds a Bachelor of Arts in English with a double concentration in Creative Writing and Literary Comparison, which seemed like a good idea at the time. After stumbling through careers in entertainment, publishing, law and teaching, she’s returned to her first love: writing. A self-admitted caffeine addict and gym rat, she currently lives in upstate New York with her husband, two parakeets, and a cat with a very unusual foot fetish.